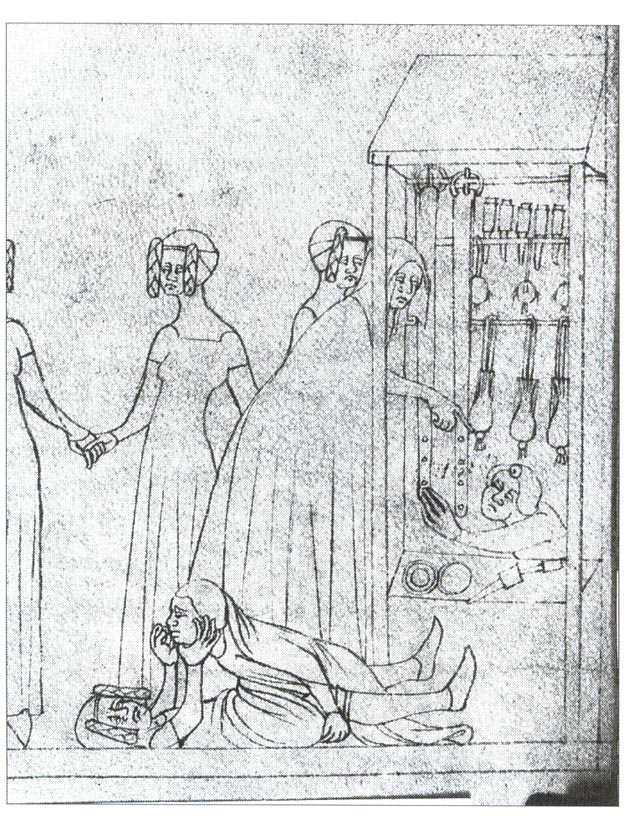 The rape of Dinah in Shechem, an illumination in the Egerton Genesis, circa 1360, London, British Library, Egerton MS 1894, fol. 17 recto.


The story of Dinah as summarized by Rabbi Vann:

"Dinah goes out to visit her sisters in the land. Along the way, she encounters Shechem, who has intercourse with her. He then speaks tenderly to her, and falls in love with her. Shechem asks his father Hamor to get Dinah for him as a wife. Meanwhile, Jacob had heard that Shechem had defiled his daughter and was distressed, but as his sons were in the field, he decided to wait for them to come home before taking action.

Hamor comes to speak with Jacob to ask for Dinah's bride price. At this time, Dinah's brothers return home from the field. They were angry and distressed, for Shechem had committed an outrage in Israel by lying with Dinah. Jacob's sons refused to give Dinah to Shehem, because they were not circumcised. On the condition that all of Hamor's men become circumcised, could Dinah become Shechem's wife. Shechem immediately became circumcised, and shortly after that, all the men in the town also did the deed.

On the third day after their circumcision, when they were in the most pain, Simeon and Levi took their swords and went to the town. They killed all the men while they were unable to defend themselves. They seized the women, children and the property of Hamor and his men, and also took Dinah from Shechem's home. When Jacob heard what they had done, he said, “ You have brought trouble upon me, making me odious among the inhabitants of the land”. Simeon and Levi responded: “Should ours sister be treated like a whore?” "

The law as aet forth in Exodus 22:15 specifies that one must offer a Mohar after sleeping with an available woman, and then he must marry her. This is subject to acceptance by her father. (If he refuses, he will just take the money). The only other mention of Mohar in the Torah is in the story of Shechem and Dinah.  But before Jacob could accept or reject the Mohar, his sons jumped in.