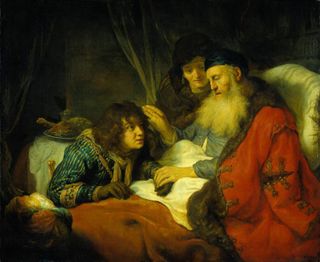 The story of the blessing "stolen" by Jacob depends on the fact that his father Yitzchak couldn't see well enough to distinguish his son Jacob from his son Esau.

The text says: "The vision of his eyes had dimmed."  Why couldn't  YItzchak see?

1.  Esau's wives burned incense in idol worship and the smoke of the incense hurt Yitzchak's eyes.

2.  At the Akeidah, when Abraham was about to sacrifice Yitzchak, the heavens opened and the angels looked on and wept. The angels' tears fell on Yitzchak's eyes and, his eyes became dim.

3.  To make it possible for Jacob to take the blessings

There is one further opinion, which is mentioned in the Gemara (Megila 28a), which states that anyone who looks at a wicked person loses his eyesight, and the Gemara says that this is shown here, where Yitzchak looked at Esau, and therefore went blind.

As to the first explanation - that Yitzchak was blinded by the smoke of burning incense - why weren't Rebecca's eyes also affected?  Maybe she was immune to this smoke, because she had been exposed to it in her childhood in Laban's house. But for Yitzchak, who was never exposed to Avoda Zara, the smoke  had a devastating effect. Esau married wives who did Avoda Zara - the cause of the blindness.

The second explanation - that Yitzchak's eyes are dimmed by angel tears indicates he was somehow damaged at the Akedah.  He was not sacrificed, but he was prepared.

The third explanation is difficult.  Did Hashem cause Yitzchak to become blind so that Jacob could more easily steal the blessing or did Yitzchak make himself blind to the ruse that was taking place?