Abraham Remarries Hagar - Is Keturah the same as Hagar?

"And Abraham again took a wife, and her name was Keturah"  Genesis 25:1 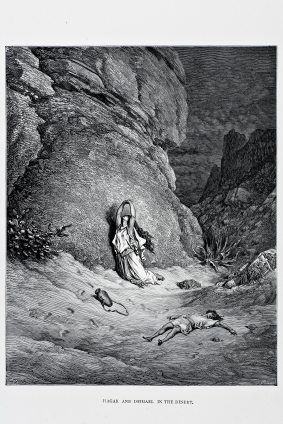 "Keturah is Hagar. Why is she called Keturah? For her deeds were [now] as pleasing as the ketoret [incense]."

"Hagar was the Egyptian maidservant of Abraham's first wife, Sarah. When Sarah had failed to conceive a child after many years of marriage, she implored Abraham to have a child with Hagar. Hagar did give Abraham a child, Ishmael, who turned out "a wild man, whose hand is against everyone and everyone's hand is against him" (Genesis 16:12). Sarah then demanded of Abraham that he banish Hagar and Ishmael from their home. When Abraham hesitated, G-d instructed him, "whatever Sarah tells you to do, hearken to her voice." Hagar drifted back to the paganism of her homeland, and found an Egyptian wife for Ishmael.

Years later, however, we find Ishmael back in the Abrahamic fold, accompanying Abraham and Isaac to the akeidah. And then, three years after Sarah's death, Abraham remarries Hagar. The reconciliation is now complete--indeed it is Sarah's son, Isaac, who brings Hagar back for her marriage with his father (as per Midrash Rabbah on Genesis 24:62)."

From the Internet Sacred Text Archive:

Rashi supposes that Keturah was one and the same with Hagar--so the Midrash, the Targum Yerushalmi, and that of Jonathan, The latter says, "Keturah, she is Hagar, who had been bound to him from the beginning," but Aben Ezra and most of the commentators contend that Keturah and Hagar are two distinct persons, and the use of the plural concubines, in verse 6, bears them out in this assertion."

Is Keturah really Hagar?  Is she or isn't she?

WIkipedia on Keturah:  "Some, but not all, Jewish philosophers identify Keturah with Hagar, stating that Abraham sought her out after Sarah's death. This interpretation is set forth in the Midrash and is supported by Rashi, Gur Aryeh, Keli Yakar, and Obadiah of Bertinoro. The contrary view (that Keturah was someone other than Hagar) is advocated by Rashbam, Abraham ibn Ezra, Radak, and Ramban."


See this excellent essay about the Midrash and the Jewish struggles with the early Christian church:   Sarah and Hagar: Migrating Midrash

"Who is Ketura?
We know something about Abraham's two previous wives. Sarah was his cousin while Hagar was of Egyptian origin. About Ketura, however, the text is silent and gives no explanation[1], leaving it to the commentators to express their opinion.
Rabbi Judah says in the Midrash (Bereshit Rabba 61, 4): "She is Hagar". This is the opinion of the Zohar as well (133b) and of Targum Jonathan. As we saw above, Rashi agrees with them.[2] However, the commentators who explained the text in its literal sense (peshat) did not accept this. Rashbam states in short: "According to the peshat, this is not Hagar", without providing any explanation of his opposition. The difficulty might be as formulated by Rabbi Nehemia in the Midrash (ibid.): "Behold, the text reads va-yosef, literally 'he added'. [Gen. 25:1 reads: Abraham took another wife, whose name was Keturah. The Hebrew actually says "He added on another wife".] If Hagar were identical with Ketura and Hagar was already his wife, there would have been no need to say about her that 'he added' her to his wives.
Ibn Ezra raises another difficulty: "Ketura is not Hagar, because it is written: "But to Abraham's sons by concubines" (25:6). In other words, the text is not talking about one concubine but about two, at the least. So we must understand that Ketura was added to Hagar. For Rashi this does not constitute a problem, because in verse 6 he wrote: " 'and for the sons of the concubine' [pilagshim is written defectively, without the second yod]- defective spelling, as there was only one concubine, who is Hagar who is Ketura".[3] But in the Massoretic Text of the Bible as we have it today the word is actually written pilagshim, with plene spelling which indicates the plural.[4]
If Ketura is not Hagar, as many of the commentators maintain, we would like to offer a possible identification. G-d's last promise to Abraham in His first revelation was: "And all the families of the earth shall bless themselves by you" (12:3), and apparently this was the most important promise. What is its significance? Does venivrekhu really mean 'bless', as understood by some commentators (Rashi, Ibn Ezra, Radak)? According to Rashbam (on the parallel verse, 28:14) the meaning that comes to mind is 'to graft' a branch, and the connotation is 'to bless by combining', in other words the families of the earth will intermingle with your family.[5]
If we accept this second meaning, we find it to be the exact opposite of he commandment of G-d to Abraham to "Go forth from your native land and from your father's house" (12:1). That commandment pointed Abraham in the direction of separation and withdrawal from other men, while this blessing points to renewed connection. Hence the entire experience of severance from his society and from his father's house had only one purpose - to make it possible for Abraham to crystallize and shape his personality.[6]
If indeed Abraham was destined to once again maintain contact with all the peoples of the world, we can now consider the possibility that Abraham's three wives - Sarah, Hagar and Ketura - represent his connection with the three families of the earth, for it was through the three sons of Noah-- Shem, Ham, and Japheth-- that humanity was again established after the flood.
And we indeed found the following words in the midrash anthology Yalkut Shimoni for Job (903): "Abraham married three women: Sarah, the daughter of Shem; Ketura, the daughter of Japheth; Hagar, the daughter of Ham". And in fact he married them in the order in which the "fathers" appear in the Bible (6:9) - first the daughter of Shem, then the daughter of Ham, and finally the daughter of Japheth.
By marrying these three women, the blessing that G-d bestowed upon Abraham, that "all the families of the earth shall bless themselves by you", was fulfilled, and similarly when he produced offspring from these three women, the blessing that he would be "the father of a multitude of nations" was also fulfilled.
[1] Radak says this is to teach us that "with this one, he did not examine from which people and which family she came". However he adds: "But he certainly sought a suitable woman, who would not upset him in his old age. And also he was careful that she not be a Canaanite".
[2] If indeed Ketura and Hagar are one, then Yitzhak's act is especially noble, because Hagar had been sent away under pressure from his mother Sarah, out of concern for him and his education (see in this connection also the comment of Rabbi S.R. Hirsch).
[3] We already found a dispute of this sort in the Midrash. See Bereshit Rabba (61, 4).
[4] Rabbi Akiva Eiger gives this case in his Gilyon Hashas, in the long list he included about the differences between the Bible as cited in the Talmud and in our Bibles (Tractate Shabbat 55b).
[5] Ibn Ezra (in his Shitta Aheret to Genesis), has reservations about this interpretation: "A great scholar wrote in his book that "they shall bless themselves by you" means 'to graft' other nations onto your stock. I don't know where he got this from".
[6] And it is thus that the statement to Abraham in the Zohar (77b in the Hebrew translation): "go forth - for yourself, for your self- improvement, to improve your level"."

A quote from Dalia Marx, a professor at HUC Jerusalem in a drash posted on the Netivot Shalom Website:

"Each of us is Hagar sometimes - lost and abandoned in the middle of the wilderness, standing hopelessly and full of yearning in the face of dangers that beset that which is dear to us.

Each of us is Abraham sometimes - torn between our great loves and unable to repair the tears.

Each of us is Sarah sometimes - hurt and abandoned and feeling forsaken, even within our own homes and families.

May we not have to wait a generation's time for repair and consolation! May we learn to open our eyes and see a well of living waters and pour balm over the wounds of the past!"