Moses at the Burning Bush

From the Jewish Calendar at Chabad.org: 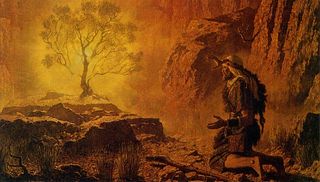 On the 15th of Nissan of the year 2447 from creation (1314 BCE) -- exactly one year before the Exodus -- Moses was shepherding the flocks of his father-in-law, Jethro, at the foot of Mount Sinai, when G-d appeared to him in a "thornbush that burned with fire, but was not consumed" and instructed him to return to Egypt, come before Pharaoh, and demand in the name of G-d: "Let My people go, so that they may serve Me." For seven days and seven nights Moses argued with G-d, pleading that he is the wrong person for the job, before accepting the mission to redeem the people of Israel and bring them to Sinai.

From the Midrash Rabbah:

Moses had thought to himself that the Egyptians might consume Israel. So G-d showed him a fire which burned but did not consume, saying to him: "Just as the thornbush is burning and is not consumed, so the Egyptians will not be able to destroy Israel."

"Man is a tree of field." (Deuteronomy 20:19). But the field has many types of trees. The Talmud compares the righteous Torah scholars to fruit trees, which bestow beauty, fragrance and nourishment upon the world. The fruit trees also burn -- they burn with the ecstasy of their Torah study, with the fervor of their prayer, with the warmth of their good deeds. But theirs is a fire that burns and burns out, a fire that is sated by the words of Torah and prayer and the fulfillment of the divine will.

When Moses, the most perfect of men, beheld the heart of flame that smolders within the thornbush, he was humbled by the sight. "I must turn aside to see this great sight," he said: I must move from where I am and strive to awaken in myself the insatiable fire of the simple Jew.

The comments to this entry are closed.