"May you be like Ephraim and Menasseh" - the traditional shabbat blessing for boys comes from Vayechi.

In this week's Parsha, the aging Jacob explains his burial wishes and gives a blessing to Joseph's sons, his left hand on the head of Manasseh and his right on the head of Ephraim. 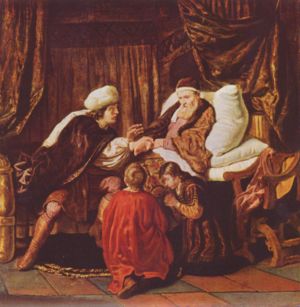 The right hand represents the stronger and the better side of things. Joseph promises to make Ephraim's descendants a great and prosperous people.

At first, Joseph believes his father is mistaken because he is blind. (Sound familiar?  Remember Isaac's blessing of Joseph and Esau?) Ephraim is the younger of Joseph's sons and not entitled to a greater portion of an inheritance. But when Joseph attempts to correct Jacob, Jacob insists that he knows exactly what he’s doing and that the blessing of the second born is intentional.

What it was about Ephraim and Menasseh that made them worthy of such great blessing?

The commentary Igra DeKallah, quoted in the anthology Wellsprings of Torah, tries to answer this same question by looking at the boy's behavior as compared to others in the story:

Why should Jacob have wanted all his descendants to bless their children with the examples of Ephraim and Menasseh rather than with that of some other two of the tribes of Israel?

Because the two young sons of Joseph had conducted themselves in accordance with the fundamental law of the Torah; namely, that one should neither consider oneself greater than another nor envy another. Even though Jacob had set Ephraim, the younger son, before Menasseh, the first born, Ephraim did not become arrogant and Menasseh did not become jealous. Seeing this, Jacob expressed the hope that all the Children of Israel would be like Ephraim and Menasseh, free of arrogance and envy.

See this discussion of Menasseh and Ephraim at Chabad.org.  Click here.