How did Cain die? 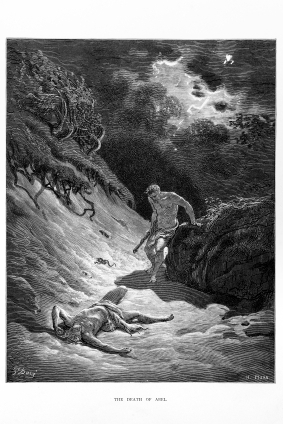 "[The story was] that Lemech was blind, and Tubal-cain was leading him. He spotted Cain, who appeared to him as an animal, and he told his father to draw the bow, and he killed him. As soon as he learned that it was his grandfather Cain, he clapped his hands together [in anguish] and clapped his son between them and killed him. So his wives separated from him, and he attempted to appease them.

And who was another son of Lamech?

"And Lamech lived an hundred eighty and two years, and fathered a son from whom the whole world was built [to be rebuilt]. He named him Noach, saying, ‘This one will give us rest from our work and from the toil of our hands from the ground, which Elohim has cursed [because Noach was to invent agricultural tools].'"

At Aish's website, see this excerptfrom Rabbi Fohrman's new book, "The Beast that Crouches at the Door: Adam and Eve, Cain and Abel, and Beyond."   Here is part of it:

"According to the Midrash, here is what happened:

Lemech was a seventh generation descendant of Cain. He was blind, and he would go out hunting with his son, [Tuval-Kayin]. [His son] would lead him by the hand, and when he would see an animal, he would inform his father, [who would proceed to hunt it]. One day, [Tuval Kayin] cried out to his father: "I see something like an animal over there." Lemech pulled back on his bow and shot. ... The child peered from afar at the dead body... and said to Lemech: "What we killed bears the figure of a man, but it has a horn protruding from its forehead." Lemech then exclaimed in anguish: "Woe unto me! It is my ancestor, Cain!" and he clapped his hands together in grief. In doing so, though, he unintentionally struck Tuval-Kayin and killed him, too. (Tanchuma to Genesis, 11)"

"Nechama Leibowitz asks a simple question. According to the Torah, the time span from the Creation to the Flood is approximately 1500 years. (It can be calculated from the lifespans listed in Ch.5.) In this 1500 years, we read of only four or five episodes. Why only five stories in such a lengthy time span? The obvious answer is that every one of these stories is in itself monumental. They each represent landmarks in the development of the world, or possibly in the history of man. Nechama Leibowitz reads Parshat Bereshit as listing four specific steps which each played their part in the collapse of the human enterprise. Each story of the parsha represents a new level of man's self-corruption.

If we want to understand the process more carefully, we need to study the pesukim themselves. Necham Leibowitz proceeds to detail the incremental deterioration in the moral behaviour of mankind, outlining the nature of each sin, and the essential moral “leap” of each stage. She lists the sins: Adam - defying God’s command. Cain - hot blooded murder. Lemech - the violent society, cold blooded murder. Sons of God - Breakdown in law, moral chaos. She reads Bereshit as an account of the human ability to sin, the defiance in man, the immorality and evil that is within the power of man - and of all creations, only man - to create. "